The past few days have been extremely long and eventful. Tuesday (11/10) the girls had their follow up eye exams. Rachel's eyes are looking better every week and are heading in the right direction, but Haley's left eye was not looking good. Dr. Coats was concerned that maybe her retina was detaching and recommended a retinal specialist from Texas Children's Hospital to look at it. After the specialist examined the eye, he thought it best to do another surgery, but more involved than just the laser. So Haley was transferred to Texas Children's Hospital for the surgery. The surgery was done this morning and it went well. Haley made it through the surgery just fine and the report from the doctor was better than expected. Her retina was only detaching a little and was on the corner of her eye which is a better location for that to happen than in the center of the eye. There was some scar tissue that formed after the laser surgery she had a couple of weeks ago that was pulling on her retina. The doctor originally thought the Retina was folded and had torn off a lot, but it wasn't as bad as they had expected. So we are hopeful that her eyes will heal and her vision will be spared. The doctor will check her eye in a week and the plan is for Haley to be transferred back to Woman's Hospital to be with her sister Rachel. Rachel is such a feisty little thing. Today her nurse told us that she pulled out her feeding tube and its hard to keep the prongs in her nose for the cpap. Rachel likes to move around a lot. The biggest goal we have right now for Rachel is to help her grow more. Rachel's last weight was 4 lbs 11oz. She hasn't quite hit 5 lbs yet. They have added more calories to her breast milk feeds so hopefully that will help increase her weight gain. Rachel and Haley are such little troopers. We are so proud of them.

Haley after her eye surgery. She was intubated again, but just for the surgery. They should extubate her soon and she will be on cpap again. 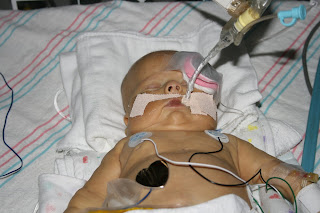 Rachel enjoying her pacifier. She grips that pacifier strong and can almost hold it in herself. 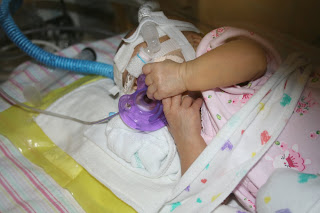