Haley has had a pretty good weekend and is recovering well after her surgery. She is starting to have some good bowel sounds which is very good and we are happy they have returned so soon after the surgery. Dr. Abrams told us that he will most likely restart her feeds on Monday. I have some breast milk stored in the deep freezer for Haley. I saved some for when she restarted feeds after her surgery. Breast milk is so much gentler for her sensitive tummy. I'm glad I was able to save some for her. She has done really well considering she had surgery only three days ago. She did have to go back on the nasal cannula for just a little flow of oxygen. She was having some desaturations and needed some extra oxygen. She will be off the oxygen again in the near future. We can tell Haley is feeling better. She is acting more alert and awake. We hope and pray that this surgery was the last hurdle for her to come home. We also look forward to her getting back to taking a bottle again. We hope that she will be home with us sooner rather than later. She is such a precious little girl. We love and cherish her very much. Haley's updated weight is 6 pounds 8oz.

Haley with her Santa hat 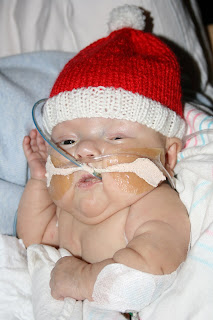 Little Rachel is no longer smaller than Haley, in fact she is about four to five ounces bigger than Haley. Rachel will have a busy week coming up. On Wednesday, she will be having a gastric emptying scan and a test to check her reflux. She will be transported to Texas Children's Hospital for these tests and then transported back to Woman's Hospital. A gastrointestinal doctor will determine if she needs a g-tube or fundo and also be able to help us get a better idea about the trach. So the girls are pressing forward. We are so thankful for their progressions. For being so little they sure are strong. We love them very much! 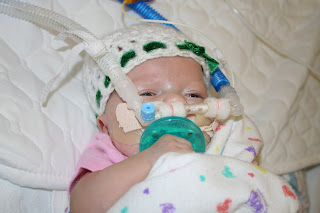