Flashback Friday: 22 weeks with the Sextuplets

The sextuplets 3rd birthday is coming up fast on August 4th.  As I look back on that day the sextuplets were born (22 weeks, 6 days), I can remember the panic and the uncertainty.  My body couldn't take it anymore.  I was worn out physically and mentally, but Thomas and I had HOPE and FAITH that things were to go as our loving Heavenly Father had planned for us and our babies.  Despite the pain, the loss and the sorrow that we went through, we are beyond blessed.  Haley and Rachel are our surviving miracles who bring us Joy, Love and Hope...

Here is one of the last pictures taken of me pregnant with the sextuplets.  I was 22 weeks.

No fun being sick

Haley and Rachel have had a rough past week.  It all started with Haley last week when she started vomiting.  She had caught what has been going around - the dreaded stomach bug!  We tried to give Haley Pedialyte to help keep her hydrated but she would not drink it.  We were giving it to her in her sippy cup and later we realized that she associates her sippy cup as having only her Pediasure in it.  We gave her some Pediasure because she wanted it, but she would just vomit it so we tried water, but she would vomit that too.  We got worried as she was just not looking good at all and we knew she was dehydrated.  We took her to the ER and they gave her Zofran (anti-nausea med) and told us to give her 10 ml (oral syringe) of Gatorade every 3 minutes.  Well that worked!  She finally would drink something other than the Pediasure which was NOT agreeing with her stomach.  It took Haley about 3 days to get back to her normal active self. We are so happy she is well again.  Then it hit Rachel.  We assumed it would go through the house to all of us, but luckily Thomas, I and Kayla have avoided it (so far).  I have been washing my hands a thousand times a day to avoid spreading it.  Hand washing is the key!  Rachel is just not feeling well.  She has a fundo so she really can't vomit, but she has been having a lot of diarrhea and it is still going on though starting to decrease some.  Her doctor said it can take up to a week to stop.  It is easier to keep a child hydrated when they have a g-button like Rachel.  We have continued to feed her though have been using some Pedialyte as well to keep her hydrated.  She is just not herself and we look forward to when she gets well and back to her normal self.  So this is what has been going on in our house the past week and why I have not done a blog post in over a week.  I don't have any pictures since I have not gotten my camera out this past week.  I will be doing their 3rd birthday photo shoot in a week.  Lots of pictures to come!  I can't believe their 3rd birthday is coming up on August 4!
Posted by Amanda 2 comments:

The Girls 1st visit to the Zoo

We took Rachel, Haley and Kayla to the Houston Zoo today (Saturday).  This was their first visit to the Zoo.  It has been raining a lot here in Houston and we needed to get out of the house.  The chance of rain today was high, but we took the risk and hoped we wouldn't get rained on.  We did get caught in the rain while at the zoo, but for only about 45 minutes.  We just took cover and waited.  Besides the rain, we had a good time.  We look forward to going back to the Zoo in the future.

The Girls saw Lions and Tigers and Bears, Oh My!  Since it was cloudy and rainy, the animals were just lounging around or sleeping.  I don't blame them.  I would be sleeping too!


We saw the Giraffes too.

Kayla has turned 7 months old.  I can't believe it!  Why does she have to grow up so fast?  To capture her at 7 months old, I did a couple of photo shoots.  The first one is a continuation of the patriotic theme since it's July and the 4th was about a week ago.  The other one is of Kayla wearing a cute bunny ears cap (last pictures on this post).  This cap was too big for her back around Easter time, but it fits her now and I have to say so cute!!!  I just had to take pictures of her wearing it.  Sweet precious girl! 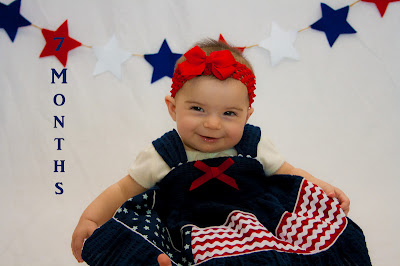 Kayla is still a petite little girl.  She weighs 14 lbs, 5 oz.  She has not gained a lot the past month.  Last month's update I talked about how Kayla has reflux and spits up a lot.  We tried the Prevacid and it didn't work at all.  Her doctor switched her to Bethanechol and it has decreased the spitting up some.  Thank goodness, but her rate of weight gain has been slower this past month.  She is just not a big eater.  She just started drinking more than 4oz of formula per feeding.  She takes around 5 bottles per day.  She gets baby food (fruit, veggies, cereal) twice a day and she likes all of it, but just doesn't eat a large amount of it.

Kayla doesn't have any teeth yet, but she had her first visit to the dentist on June 28.  I took her to the dentist since it's recommended at 6 months old.  The dentist said all looked good and that it looks like her teeth are getting closer to coming in. 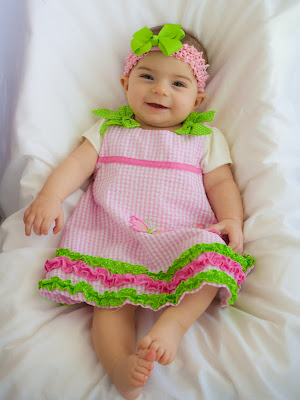 Kayla is doing new things.  She started sitting up on her own on June 30 though she topples over often.  When laying on her tummy she turns in a full circle.  She is starting to scoot some too.  Kayla also rolls both directions to get where she wants to go.  Kayla started saying "da da da" and "ya ya ya" on July 4th ( see video below).  She has a loud voice for such a little girl.  Her talking is so cute!


Kayla is definitely a curious and determined little girl.  She loves to explore new things and loves to play with her toys.  She is a people person and likes the attention.  She likes to be around people and loves her big sisters Rachel and Haley.  Kayla smiles and laughs a lot.  She is also so very ticklish.  Kayla has her own personality.  She is feisty, sweet and full of spunk! 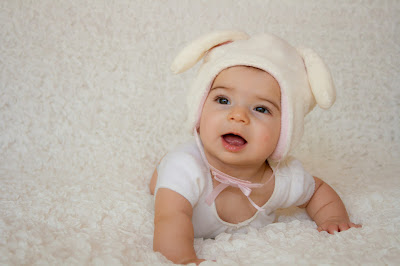 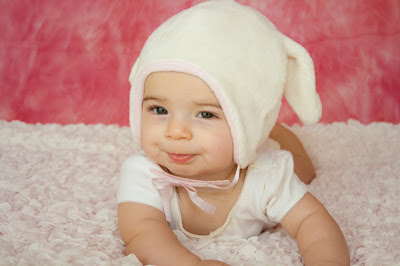 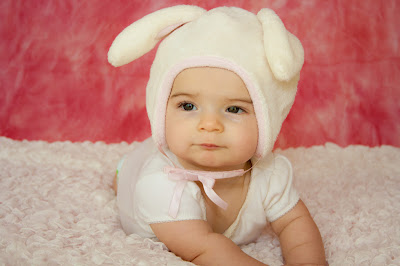 Haley, Rachel and Kayla as well as Thomas and I wish you all a Happy 4th of July!

Back when I was pregnant with Kayla I said that I would post pictures of the nursery when I finished it, well I never finished it before she was born.  I did finally finish it a couple of weeks ago.  Yes it has taken that long!  Life got busy after she was born and since she was in our bedroom, I didn't really see the rush to finish it.  We finally moved Kayla out of our bedroom a week ago.  I know we had her in our room for a long time, but since she was waking us up at least once at night to eat I didn't want to have to go far to feed her.  The move for her and us has been great.  She still isn't sleeping through the night, but we have our room back and she is sleeping in luxury in her beautiful crib in her own room.  We just hope she starts sleeping through the night soon! 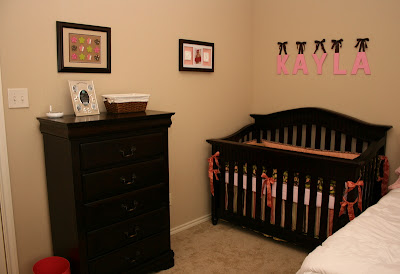 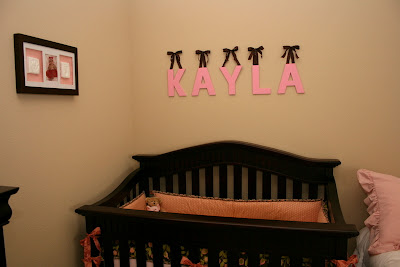 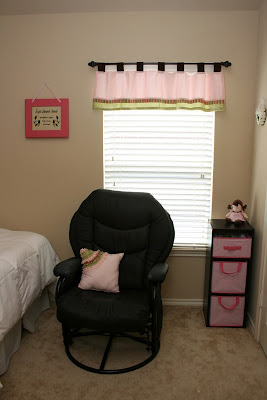 This beautiful frame with Kayla's birth info is so very special.  A wonderful lady named Janet at RFEngraving made this frame just like the ones she made for our sextuplets.  You can see those frames here.
I'm so glad that I was able to get one made for Kayla as well.  Its a beautiful addition to her room. 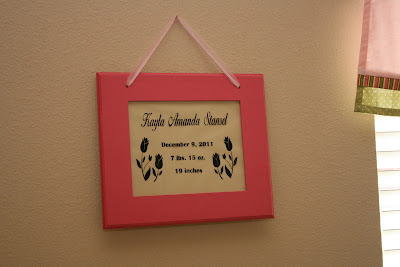