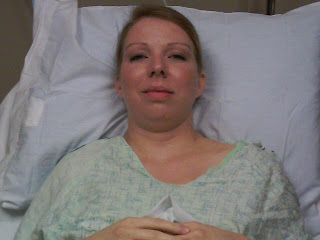 What an adventure this weekend has been! Late Friday night 15 hours after the cerclage, I developed a fever of 100.7 which lasted through the night. I took Tylenol which helped, but the fever came back again late Saturday afternoon. I called the on-call doctor because I was concerned that something had gone wrong with the cerclage. The doctor told me to go to the ER to be evaluated since she didn't know what was going on over the phone. We arrived at the ER and got admitted fairly quickly, but like most ER's we had to wait awhile to be seen by the doctor. I was feeling so miserable as my fever got up to 101.1 and the gurney I was laying in was so uncomfortable. They tested me for the flu and a urinary tract infection which both came back negative. Also had blood tests which didn't show any thing alarming. The doctor finally came in to talk to us who suspected I had just a simple cold or a virus. I was prescribed an antibiotic just in case there is some kind of bacterial infection going on. Of course, I wanted to know if the babies were OK with all this going on. They agreed to an ultrasound. The ultrasound went well and the sonographer was so nice and helpful. She got great pictures of the babies. We were so happy to see them all doing good. It's amazing to see the babies on the ultrasounds. They were moving around so much. They are looking more like little human babies. They also looked at my cervix and the cerclage and they both looked great! So no problems there. We left the ER 4 hours later with a prescription for an antibiotic, $150 out of our pocket for the ER visit, awesome ultrasound pictures and peace of mind that the babies and I are OK.

A little note about the doctor. He was an older gentleman and very grandfather like. He has delivered a lot of babies. He was shocked when he heard I am pregnant with 6. He was also shocked to find out how I got pregnant with 6 as it's rare to get pregnant with 6 by doing ovulation induction and intrauterine insemination. He stayed in the the exam room for a while and just talked to us about it. He was fascinated with the pregnancy, simply because he had never seen any women before with sextuplets. He was so enthralled, he followed us into the ultrasound exam room and watched as the ultrasound was performed. This MD was unlike any other I have seen in an ER room because of the amount of time he spent with us. It was nice to be treated like a person rather than a patient by a doctor.

We are so glad we made it through this weekend and hope there will not be any more ER visits any time soon. We are also glad that all is OK with me and the babies.
Posted by Amanda 5 comments:

Today I had a cerclage placed (cervix sewn closed). The procedure was quick. It was quicker than I expected. I'm currently not in pain. I'm doing well and the babies are doing well. We were able to get a look at them on the ultrasound today. They sure have grown since we saw them a week ago. I'm steadily gaining weight. I have gained 14 pounds so far. I'm currently 13 weeks along.
Posted by Amanda 1 comment:

Welcome to our Journey

On March 22, 2009, we were thrilled to discover that we would be welcoming a new little one into the world in just 9 short months. Little did we know that our "little one" would suddenly be six. At our first ultrasound we discovered that we would be having multiples, but not for another month did we know for sure that I was carrying six.

Now at 13 weeks pregnant, we find ourselves feeling grateful, blessed, and a little overwhelmed. We hope that this blog allows us the opportunity to learn from others as well as share with you our experiences with each of our six children to come. We invite you to join us on our journey.
Posted by Amanda 4 comments: