It has been a very busy last few days for the girls, especially little Haley. Haley has been back in the hospital for a few days now, and could be there another week or even longer. She is doing much better since they put her on Oxygen and a diuretic to get the extra fluid off. Haley is back to her true weight (8 pounds 11oz). Haley has had several specialists (pulomonologist, cardiologist, and gastrointerologist) looking at her to figure out what is going on. They have diagnosed her with pulmonary hypertension thus far. The right side of the heart was a little enlarged due to the pulmonary hypertension. The doctor did get that under control with medication and supplemental oxygen so they say her heart will be ok. The lungs will take time to heal. The gastrointerologist looked at her today to figure out what is going on with her belly. Her belly is looking much better than it did when she was at home. They still are trying to figure out why it got distended. They ordered a test called a barium enema to see if there are any strictures. She was started back on feeds, but at a slow rate to be safe. Yes poor little Haley has been through the ringer lately. We hope and pray they can figure out what is going on with her, and get her back home soon. We miss her very much at home, she brought so much joy to us when she was here with us. We cherished the week or so we had at home with her, and look forward to having her back.

Haley so tired after a long day in the NICU 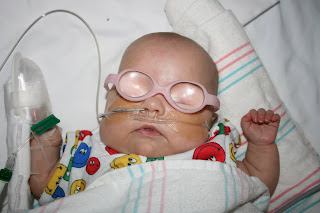 Rachel continues to improve and is doing really well. It has been confirmed that Rachel did in fact have a staph infection around her surgical site. They confirmed it through skin cultures. Originally they suspected it but weren't 100% sure, but now they are. The good news is that the staph does not appear to have gotten into her blood. We are so thankful for that. Rachel is getting antibiotics to kill the infection. She is now starting to learning to eat from a bottle. Occupational therapist are working with her on that. Rachel's feeds are being transitioned to intermittent/bolus feeds instead of continuous. She is doing well with that transition thus far. She continues to grow and now weighs 9 pounds. We are hoping that once her g-tube is changed out to the g-button, she will be able to come home. That should happen within the next two to three weeks. Rachel is such a little princess, we adore her and can't wait to have her home as well. 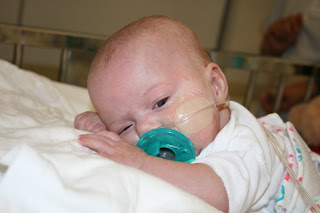