Brandon turned 18 months on June 14th (so long ago!!!).  He had a well child check on that day with his pediatrician Dr. Edralin.

So the stats above show that Brandon is short and average weight.  He is proportional for his length and weight.  He's going to be short like his sisters Haley and Kayla.  I have heard that kids with spina bifida tend to be shorter than average, but I'm not 100% sure about that.  I do know that my husband's genetics tend to run on the shorter side so I think Brandon is on the shorter side due to his genetics.

All looked good when his pediatrician saw him at his 18 month appointment.  Brandon was also seen by Dr. Fletcher (his neurosurgeon) on June 14th and he was pleased with Brandon's progress and abilities.  Brandon's shunt has had NO problems since it was put in on December 21, 2015.  We are so happy, thankful and blessed!

At 18 months Brandon started getting speech therapy twice a week to help with his speech.  Brandon is still not talking a lot.  He says mama, dada, baby and bye.  Also speech therapy is going to help address getting him off the bottle and onto some kind of age appropriate cup.  He has slightly weak lip muscle tone and just needs some help to get those lips strengthened.   Brandon also started getting occupational therapy to help him get up to par for his age.  Brandon is behind developmentally.  He is approximately 12-14 months developmentally.

Brandon loves to eat!  He is eating all kinds of regular table foods.  He loves (his favorites) applesauce, yogurt and cheese.  He is pretty willing to try new foods, but will let us know that he doesn't like something.  He will just spit it out and not reach for it on his tray.

Brandon is still army crawling.  He will get up on his hands to crawl but briefly and he doesn't do it often.  He is still working on sitting up independently.  At 15 months, I thought he had mastered it but he has not.  He still sits using his hands to prop himself up.  He is getting physical therapy 2 times per week.

Brandon sleeps well at night and always has since 7 weeks old.  So grateful!!

Brandon has such a great little personality.  He is a little flirt!  He loves to interact with others by way of smiles and cute looks he gives.  Brandon is such a sweet boy, but of course he can be a little stinker.  He loves to get into stuff and gets so upset if I take away something that he's not suppose to have.

Brandon also loves babies!  I read books to him before bed and he particularly likes the ones with pictures of babies.  He will say baby when he sees a baby.  Brandon loves his books as well.  He really enjoys when I read to him.

Brandon's 18 month photo shoot didn't go so well.  I had plans to take pictures of him in a little red wagon, but he didn't like it and cried.  So I went with plan B and he still wouldn't cooperate much.  These are the only five pictures I got out of the many I took.  The little stinker! 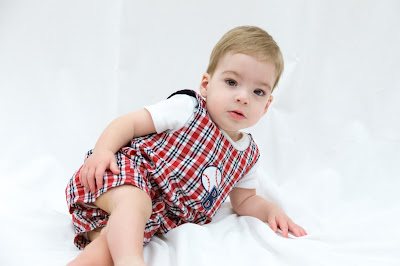 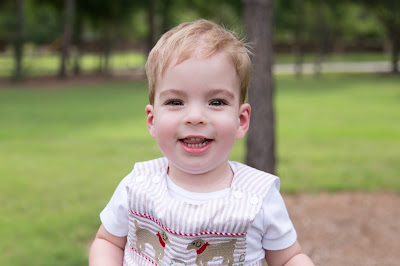 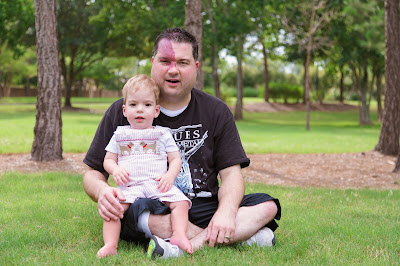