Its time for an update on Haley!  Haley is doing well.  Back in September she went to her yearly visit at the NOVA clinic at the University of Houston eye institute.  At this clinic they test her functional vision and try as much as possible to determine how much she is seeing in her right eye.  The vision in her right eye (with glasses on) is 20/1400.  This looks really bad, but its much better than was expected when she had all those eye surgeries back in 2009.  Her vision has actually improved in just one year.  Last year at the NOVA clinic her vision in her right eye (no glasses on) was 20/2700.  Overall, her vision has improved with the glasses they had prescribed for her and she is also learning to use the limited vision she has.  We are so grateful that the glasses are helping her!  Haley also saw her retinal specialist earlier this month.  The doctor said her right eye is stable and the retina is settling down.  This is great news!  We are thankful that her right eye is doing good and grateful for the small amount of retina she does have that allows her to have some vision.

Haley is a trooper and has no fear.  She gets around fairly well in familiar surroundings.  She loves to climb on just about anything.  I'm amazed at how much she gets around and all the climbing she does.  Haley continues with therapy (occupational, speech and physical).  She is making progress, but she is still behind developmentally.  Haley progresses at her own pace.  She is not talking, but she does communicate with us.  She makes different sounds and sometimes it almost sounds like a word or two.  She wears her hearing aids fairly well and we can tell she is hearing.  She will stop and listen.  Haley is using a little bit of sign language.  She has learned how to sign "more" and sometimes she signs "stop".  She is getting there.  She has come a long way in just one year.  As I think about how things were just one year ago, I'm amazed at how far she has come.

Haley is still small.  She weighs 27 pounds and wears 2T size clothing.  Its a struggle to get her to eat well.  She prefers junk foods like chips.  She loves the chips as well as cereal and graham crackers.  She is a very picky girl!  Its most likely due to her limited vision.  Kids who are blind tend to be afraid of foods since they can't see them.  Haley does smell her food and she determines if she wants to eat it based on how it smells.  She doesn't like the smell and texture of most foods.

Haley is a sweet girl.  She loves to be held and will go up to just about anybody wanting to be held.  Haley also has a mind of her own and usually only wants to do what she wants to do.  She sometimes listens and obeys my requests.  Haley is a special little girl and we love her very much!

I did a little photo shoot of my sweet girl in our backyard... 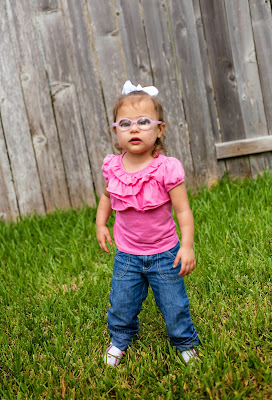 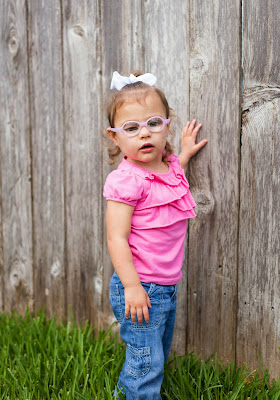 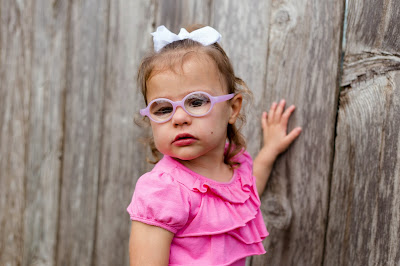 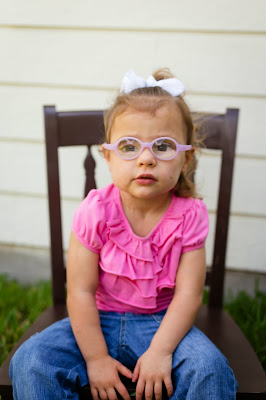 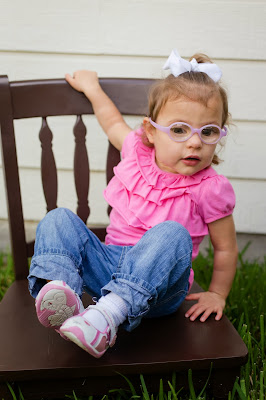